True friends come once in a lifetime, the friend that you can share your happiest moments with, along with the darkest.
Roxi is that friend for me, my confidant, my port in the storm, my glimmer of hope when all else fails. 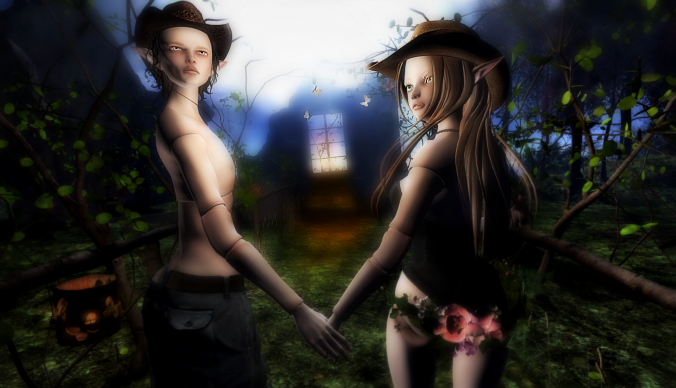 But ,a few days ago… I failed her. I failed to believe she would be ok with me telling her the truth, telling her a secret I had been holding in hopes of not hurting her…I’ll explain.
She looks forward to the Hair fair, not only for the hairs, but what it stands for. Last year, and the year before, and the the year before that she has pretty much well spent the entire time the event was open…at the event. She just stands there and takes it all in, from the scenery to the massive amounts of people that go there from every walk of life in the world we call Second Life.
She spends thousands…no, tens of thousands on hair while the event is open. It’s a win win for her, not only does she get the most fabulous hair she also knows that most of what she spends go’s to a cause she holds dear to her heart.
This year was a bit different though, She had started a blog a few days before the event last year and decided to apply for the bloggers group. She waited and she watched the Hair Fair site for months, even getting ansy when the fair was getting close and the applications hadn’t been posted on the site. But, she knew that running such and event takes alot of work so she waited for them to be posted and then filled it out.

Now, comes my failure. when the bloggers for the event were given the invite to the group, she waited for 2 days she waited, doing nothing but crossing her fingers and looking at her screen. No shopping, no taking blog shots…nothing. She asked in groups if the invites had been sent out, she asked friends…she asked me….I said nothing. I had been sent an invite to the group.

You need to understand how much this woman means to me…everything. So I knew..I just knew that when I told her that I had gotten an invite it would crush her. Not because I was chosen and she wasn’t…but because thats the whole reason she started to blog, so she could share her own version of what the event means to her with friends and family, and complete strangers for that matter. I failed her, I failed her in so many ways I can’t count. But the biggest one..the most important one….I failed to believe in her, I failed to have enough faith in her, I failed to be her friend.

My father told me long ago ” Don’t ever say your sorry, saying that after the fact doesn’t make a bit of difference”…” It doesn’t make the thing you did right..it only causes more pain”
He went on to say ” Instead of being sorry…don’t do it to begin with and/or learn from the mistake”

This is what I’ve learned. I’ve learned that Roxi….Roxi, has More grace than I ever imagined. She has strength and willpower than I will ever have. She knows how to be a true friend….. and I can never thank her enough for that.

I will be blogging and giving more detail on both this, yet again Amazing collection offered by 8f8 @ The Seasons Story, and the greatest collection of Hair designers on the grid that are all in one place.. The Hair fair. For now though..well…it’s friends before pleasure.

One thought on “True Friends”