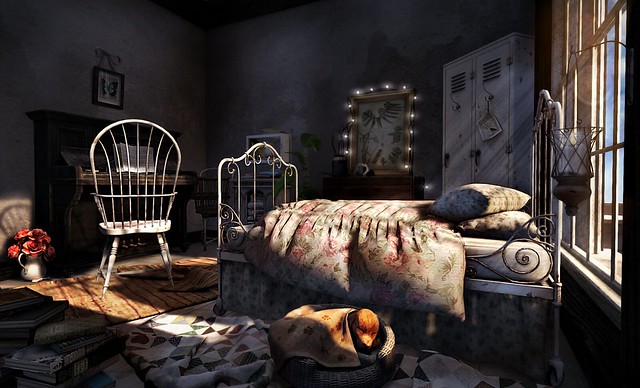 Hello peeps!
I woke up this  morning and thought  it was going to be a lazy day, boy was I wrong!
Apple Fall released His Dolly Gacha at The Chapter four..I think he does it on purpose to keep me busy! As soon as I saw it I knew I had to have it.
So I put on my big boy pants, wiped the drool from my face..(or was  it a bit  of PB & jelly?) In either case I headed out to  test the strength of my  pulling arm. Well..it was kinda weak, but I managed to pull the rest of the collection together and have it now gloriously displayed. I used his Chelsea townhouse and I will be daymed if it doesn’t just fit and look very proper. I also found a few things from his other collections and added them into the room as they seem to fit. Only a few words I can say about Apple Fall..which are..freaking fantastic. I also brought  in :CP:’s offering for The House Hunt..again..it fits and  is well made..of course all her stuff is..otherwise  I would’t own it. To add the finishing touch I had to have a puppy darn it! ISPACHI’s Sleeping Puppy In Basket did the trick don’t ya think?

One thought on “Morning Light”