If I had my choice of going to one place before I died (other than being able to see my fathers land again) that place would be Italy. For years I have dreamt about it..and when I said dream..its just that,,daym it. I wouldn’t got for the wine nor the cheese..I would go there for the landscape and buildings. It amazes me how absolutely beautiful it is. From the sea side towns perched on top of giant cliffs to the rolling hills of wine country.

Well..ya know what they say ” if you can dream it..someone in SL will eventually build it.” Thats what 8f8 has done and in AMAZING detail. When I saw the pictures on his flickr I knew it had to be mine..it had to. Luckily I blog for him..Thank God! I am so freakin blown away by this set. I knew a few days in advance that it was coming out so I had to prepare to make room on the sim for this beautiful build and all the other goodies that come in the set. So..being a man of sound mind..I cleared all my other gacha boxes ( yes..I put my items into boxes and have a giant prim rezzed with the letters of the alphabet and each one go’s where it belongs) and even..picked up my resale store….Did I mention that it is amazing? Then I sat..and waited for what seemed years until he put out the notice in his blogger group. ( ok..it was only a few days..but we all know what the build up to the Arcade opening is like) As soon as the notice was sent out..and probably before the ink was dried on it.. I was on him like a fat kid to cake..and then..Heaven itself opened up ..I saw two angels, carrying a package with my named etched in gold on the front, float down from above and place the box ever so gently on the ground before my feet. They then turned around and flew back up from whence they came. I smiled and waved at them, watching them ascend. As soon as those two were out of sight…I ripped that shit open as fast as I could and rezzed the whole collection..then stood there, awe struck.
Today..I am bringing you a bit of a teaser post, with the rest to follow in the coming days. Ya have to see all the other things silly,but right now I present you with the….8f8 primavera in Toscana. 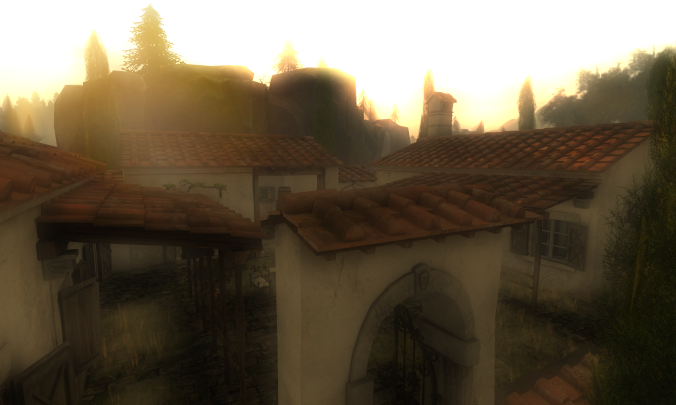 One thought on “Tuscany anyone?”